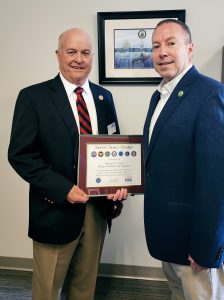 “I was honored and humbled to receive the Seven Seals Award. For me, this award recognizes UMAC, its important mission, and the volunteers and UMAC Champions that support our mission,” said Tom O’Connor.

The award is presented in recognition of significant individual or organizational achievement, initiative, or support that promotes and supports the ESGR mission, to include the efforts of the more than 3,600 volunteers who carry out ESGR’s mission across the Nation. Tom serves as the staff lead for the Chamber’s Unified Military Affairs Council (UMAC). UMAC recognizes the importance our military installations and their significance to the overall well-being of the Capital Region. UMAC’s mission is to highlight the capacity of the military installations in the Capital Region and ensure their long-term viability. It works to increase public knowledge of the contributions made by military units in the Capital Region, all of which impact our global, national, state, and regional security and economy.

ESGR, a Department of Defense program, was established in 1972 to promote cooperation and understanding between Reserve Component Service members and their civilian employers and to assist in the resolution of conflicts arising from an employee’s military commitment. ESGR is supported by a network of more than 3,000 volunteers in 54 committees located across all 50 states, the District of Columbia, Guam-CNMI (Commonwealth of the Northern Mariana Islands), Puerto Rico, and the U.S. Virgin Islands. Volunteers, hailing from small business and industry, government, education, and prior military service bring a vast wealth of experience to assist in serving employers, Service members, and their families. Together with Headquarters ESGR staff and a small cadre of support staff for each State Committee, volunteers work to promote and enhance employer support for military service in the Guard and Reserve.

ESGR has served our country for more than 45 years, fostering a culture in which all employers support and value the employment and military service of members of the National Guard and Reserve in the United States. These citizen warriors could not defend and protect us at home and abroad without the continued promise of meaningful civilian employment for themselves and their families. ESGR has continued to adapt to meet the needs of Reserve Component members, their families, and America’s employers by joining forces with a network of other national, state, and local government and professional trade organizations. Together, We All Serve!