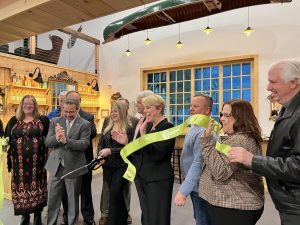 In 1869, William Henry Harrison Murray described the wilderness of the Adirondacks in his book “Adventures in the Wilderness”, and started a major historical event called the Murray Rush of that year.  A general state of unreadiness and nearly impossible travel routes gave rise to the moniker “Murray’s Fools.” This label was often applied to those who ventured into the wilderness in 1869 and found themselves, at first, unprepared for its obstacles. Despite severe challenges, the brave souls who sought out the restorative Adirondacks that Murray wrote about that first summer of 1869, did not give up. From 1870 to 1874, Murray’s Fools poured into the Adirondack Mountains with much success.  This heritage has been passed down through generations, to his great-great-grandson Randall Beach who, together with wife Sarah, founded the Murray’s Fools Distilling Co. (murraysfoolsdistilling.com) in 2015.  Expansion of the company led them to open a new headquarters in western Glenville at 7152 Amsterdam Rd (Rte 5), with a ceremonial ribbon cutting held on January 12.  Senior Vice President Pete Bardunias emceed the event on behalf of the Chamber assisted by Membership Executive Robin Martin, with comments by Glenville Town Supervisor Chris Koetzle, Assemblywoman Mary Beth Walsh, Metroplex Development Authority Chairman Ray Gillen, and Discover Saratoga President Todd Garofano.  A large group of well-wishers including Metroplex Executive Director Jayme Lahut and several volunteer Chamber Ambassadors were present, and a great time was had by all!

All ribbon cuttings of the Capital Region Chamber and its affiliates are sponsored by the Saratoga National Bank and Trust Company.  Photo courtesy of Assemblywoman Mary Beth Walsh.