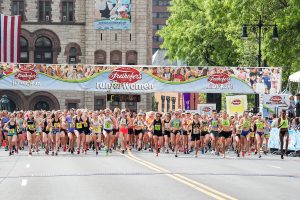 The Freihofer’s Run for Women (FRW) started in 1979 with 502 runners as the Freihofer’s Run for Life. For the first 11 years it was the 10K AAU National Championship for women and the 5K was a supporting event. In 1992, the focus became the 5k. The Capital Region hosted the USATF 5K National Championships from 1996-2004. The race had an international flavor in the early days and in 2005 the field became international again.

Recently, it was announced that the event’s 43rd edition, which was originally set for Saturday, June 5, has been moved to Saturday, Sept. 25 in downtown Albany. This is after the 2020 event had to be changed to a virtual event due to the pandemic.

The event will feature an in-person 5K, Junior 3K and Kids’ Run featuring CDC- and New York state-mandated safety measures. Virtual options will also be offered for both the 5K and Junior 3K. Registration for the event will open late spring at freihofersrun.com.

FRW Event Director Kristen Hislop provided some highlights of the event’s history, including:

The Freihofer’s Run for Women is known for empowering women. As the only all women race in the region it has a special place in participants’ hearts. Says Hislop, “We feel it is important to offer women the chance to celebrate together. There is something different about lining up with all women at the start line. There is a special camaraderie that creates an immediate bond. It doesn’t matter if she is running to win, running to celebrate a changed life, running to be a role model for her children/community, running post illness or one of the many other reasons women run the Freihofer’s Run for Women; she is doing it with other women who provide support and encouragement.”

Hislop goes on to say how the Capital Region has been incredibly good to the Freihofer’s Run for Women. “It is likely the only race in the country referred to by the sponsor name. The Freihofer’s brand and mission is all about community and it is our wonderful community that comes out to support the race each year. There are 4 women who have finished all 42 years! We have the opportunity to share stories about the women who participate each year. It gives us the opportunity to share the strength, grace, passion, tenacity, and generosity of the women (and their families) in the Capital Region. We are always interested in bringing additional partners to the event who support women and our community.”