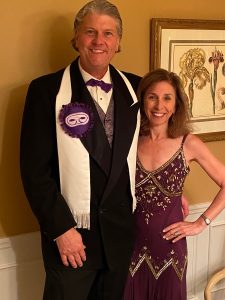 The Costumer was established in 1917 by Anna White when people began asking her about a local dressmaker that had moved out of town. Seeing an unmet need, she hung a sign outside her home and The Costumer was born! She initially began by bartering costumes for her daughter’s dance lessons and then gained national notoriety with producers, directors and popular stars serving the Vaudeville circuit.

Fast forward to 2021, the Johnsen family are the 4th owners of The Costumer.

While the retail store has a multi-generation history with families from across the Capital Region, it is their National Scholastic Theatre business that accounts for the majority of sales. The Costumer typically costumes over 1,000 shows a year and ships out over 30,000 costumes nationally from the Schenectady Theatre headquarters. Many of the costumes are designed and created by the staff in Schenectady.

The Costumer is proud to have relationships with School Directors that span the decades. Says co-owner Bonnie Johnsen, “A few years ago, we were contacted by a High School Theatre Director that used another costume company. The costumes they received were dirty and moldy, putting their production in jeopardy of opening! The Costumer saved the day! Erik personally delivered the costumes to the school. He was greeted by a delighted director, a bottle of wine, a thank you card, a hug, and a declaration that they will never do business with anyone else!”

Reflecting on her love for #CapNY, Bonnie says that she and Erik met as students at UAlbany. Now, they’re creating new memories with their two sons. Specifically, Bonnie says her family enjoy all the culture the area has to offer, including live music and theatrical productions, along with how accessible and convenient it is to live in the Capital Region!

The Costumer is grateful for the Chamber’s support throughout the years, and their help coordinating the ribbon cutting to celebrate their grand opening celebration at Mohawk Harbor in September!

To shop their costumes, accessories, props and more, visit them at thecostumer.com or 220 Harbor Side Drive, Suite 102 in Schenectady.