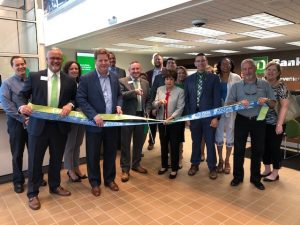 TD Bank held a ribbon cutting on Friday, September 13 to commemorate the grand reopening of their Latham branch. The bank underwent many changes to help create a better customer experience. Technology was at the forefront of the renovation, showing that TD Bank is ready to be the bank of the future.

The company first opened its doors as Portland Savings Bank in Portland, Maine, in 1852, and later grew through a series of mergers and became Peoples Heritage Bank in 1983. At the turn of the millennium, the opportunity for growth presented itself again as Peoples Heritage Bank, through several acquisitions, expanded deeper into New England and took the name Banknorth.

Looking to expand further in the U.S., TD Bank Group acquired Commerce Bank on March 31, 2008, and the company rebranded as TD Bank, America’s Most Convenient Bank. TD Banknorth locations followed suit in September 2009, completing the merger of the two companies and uniting them under the TD Bank brand name.