Sour Girlz Officially Opens its Doors in the Town of Glenville 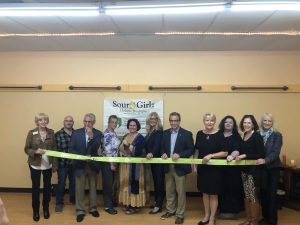 The Chamber took part in a ceremonial ribbon cutting for Sour Girlz in the Town of Glenville on Friday, October 15. The Chamber staff was joined by local elected officials, Chamber Ambassadors and many family and friend supporters.

Luciana Pawlinga, CYT & Herbalist and Jaime Zimmer CEO Organizational Specialists have been best friends for over 16 years. They are down to earth girls who have overcome adversity and want to help others feel their best though mind, body and spirit.

A  few years ago, Jaime was the sickest she had ever been in her life. She was plagued by severe depression, chronic pain and debilitating vertigo. Luciana stood by Jaime’s side through it all and helped encouraged her to go back to her natural healing ways that she had lost touch with. In Jaime’s healing journey, Luciana’s constant encouragement paved the road to starting their business together.

They began their journey with small farmers markets, selling only the apothecary items that Jaime formulated and Luciana helped make. They very quickly began to grow. Once the business grew large enough to open a brick and mortar shop, Luciana knew she would continue to focus her family, but wanted to let Jaime spread her wings to fly, following her ultimate dream. Together they decided that Jaime would carry on the Sour Girlz name and open a wellness boutique that would bring together anyone else who felt they were “sour” too;  maybe they are feeling their health has turned sour, their relationship has turned sour, their job has turned sour or life is treating them sour, maybe they feel they never fit in anywhere either. Jaime wants to help support and encourage people, just like her and Luciana by creating a safe, encouraging environment where people can be who they are truly meant to be and enrich their mind, bodies and spirits, turning life’s lemons into lemonade.

But don’t worry, you will still see Luciana at many events and in the shop… because Jaime and Lucina are best friends of course!