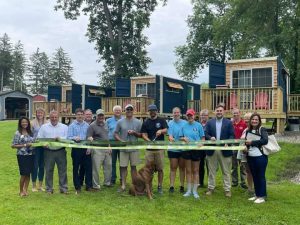 It was a great pleasure to help celebrate the dedication of some great new improvements at the Schuyler Yacht Basin on July 9, starting with these incredible new tiny homes, made from upcycled shipping containers and turned into air conditioned mini-luxury suites with a waterfront view and a very relaxed, comfortable atmosphere. Imagine an overnight stay in such a comfortable quiet bed, with your own kitchen and full, private bathroom facilities! This is a great way to enjoy private time in a very unique environment!

Plus, just steps away are bicycles and kayaks for rent, plus the Basin Grille and it’s fine food, and the full service marina in case you brought your boat with you. The Empire State Trail is nearby as is the new Gateway Visitors Center and Schuylerville’s first-ever brewery. A little further is Fort Hardy Park, where the British last down their arms in defeat after The Battle of Saratoga in 1777, and where today kids compete in annual cardboard boat races on the Hudson River. There’s Hudson Crossing Park with all is trails, scenery, more kayak rentals, Mohawk Maiden Cruises, Champlain Canal Lock C-5 and so much more. In the other direction are the restaurants, bakeries, shops, full service grocery store, wellness practitioners, art gallery, music studio, etc. of the village of Schuylerville. And a little further from that are farms, orchards, the Schuyler House and the Sword Surrender site, and more things I probably forgot. Yes, this is all within walking or cycling distance of the Schuyler Yacht Basin. Check it out today and see why do many are excited about this historic and quaint village.