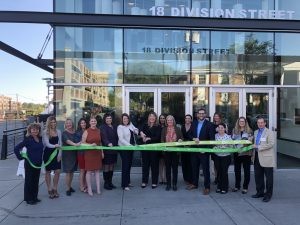 The Chamber was honored to take part in a grand opening / ribbon cutting on Thursday, September 19 in Saratoga Springs. Ms. DeAngelus and Ms. Goralczyk opened the firm in March 2019 and quickly tripled in size, adding two attorneys and two support staff to their team, which specializes in real estate transactions.

“Having been on the same transactions numerous times, I knew Jacki had the same high ethical standards and dedication to her clients that I’ve built my practice on,” Ms. DeAngelus said. “Jacki appreciates the nuances of transactional business while working with clients toward a mutual goal of getting the deal closed.” They plan to leverage their combined knowledge and experience to successfully represent buyers, sellers, lenders and investors.

The firm, known as DG Law, added Edward Hitti as an associate and Shari Chrimes as Of Counsel shortly after opening.

The open house showcased the works of local artist Tom Myott, a native of New York who is best known for his ability to engage viewers by placing them in the midst of the action in depictions of thoroughbred racing and equestrian competition.

Ms. DeAngelus and Ms. Goralczyk are excited to leverage more than 40 years of combined experience in delivering results-oriented representation to their clients and on behalf of their strategic partners. The two have closed countless real estate purchases, and understand the challenges buyers face when purchasing a home in today’s market.

“Given the amount of information available online, would-be buyers and sellers are bombarded with potentially harmful misinformation,” Ms. Goralczyk said.

In highly impactful transactions, the team understands the importance of being on the cutting edge of technology, and just as important, data security. Ms. Goralczyk holds a LL.M. in Cybersecurity and Data Privacy and engages in continual training in the field of cybersecurity.

In June, the team attained another objective, “It’s important to us to have conveniently located offices that are easily accessible to our clients,” Ms. Goralczyk said. “Though we have multiple closing locations across the state, we love the space in our new Saratoga home!”

The contemporary and well-appointed office is located just one block off Broadway, at 18 Division Street, downtown Saratoga. Included in the space are two conference rooms, providing ample room to accommodate the needs of their clients.

DeAngelus Goralczyk PLLC is eager to be a part of the community as well, having already participated in events supporting charities such as the Alzheimer’s Association, Ronald McDonald House and Street Soldiers Food Bank.