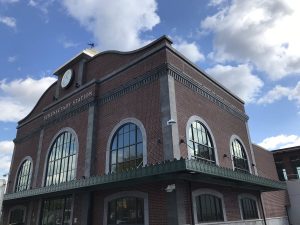 In early colonial days, the area that became Schenectady – noted for pine flats in a bend of the Mohawk River – was considered the formal “door” to the territory of the Mohawk peoples.

The new Schenectady train station opened in October 2018, creating a fitting gateway to the “Electric City” for those arriving by rail. The $23 million complex is within a short distance of attractions including the Rivers Casino, historic Proctors Theatre, Schenectady County Community College, restaurants and shops. In addition to Amtrak service, numerous Capital District Transportation Authority bus routes pass within walking distance of the station.

Inspired by the design of the city’s old Union Station, which opened in 1908, but was torn down in 1971, the new building is constructed of red brick. Dark grey stone is used as trim at the base, cornice, parapets and in stylized pilasters at the corners of the main walls. The principal façade along Erie Boulevard is divided into three parts, with a projecting center section that highlights the entryway and tiered clock tower. The latter is capped by a glimmering gold colored dome with a whimsical weathervane in the shape of New York State. The clock tower is visually connected to the rest of the building through a pair of swooping parapets that create a sense of drama. A green metal canopy wraps around the building, protecting customers from inclement weather.

Inside, visitors enter a double height room with a soaring ceiling; natural light floods in from the tall, round arch windows. Gray marble is used as a wainscot in the waiting room, and its prominent veining catches the eye, providing interest and depth. The grey terrazzo floor, speckled with flakes of black and white stone, is elegant yet durable – and suitable for a busy public area. In its center is an inlay in the shape of New York State that is etched with the state’s major cities and passenger rail routes.

In addition to comfortable seating and a ticket office, the waiting room includes displays whose artifacts trace the history of the region’s peoples and its railroads. On the walls above, large digital screens depict elements of the city’s history and highlight local attractions. There is also a Passenger Information Display System (PIDS) that depicts train arrivals and departures and other passenger information on both digital monitors and over a public address system.

Across from the main entry is the concourse leading to the new concrete platform with tactile edging that is located on a viaduct above street level; it is accessible via an elevator or stairs. The overall station project also included improvements for those arriving by car, bike and on foot, such as a reconstructed parking lot and new sidewalks and lighting.

Schenectady, New York State, Amtrak and the Schenectady Metroplex Development Authority (SMDA) collaborated over many years to see the station project to fruition. The station revitalization plan had been in the works in various forms since at least 1999, when it was described in the Downtown Schenectady Master Plan.

The station project was funded through $19 million from New York State: $17 million for construction and the remainder for engineering services and other costs. The Federal Railroad Administration provided $3.6 million toward the building, Amtrak contributed $220,000 for the PIDS and the SMDA set aside $48,000 for the improved parking lot.