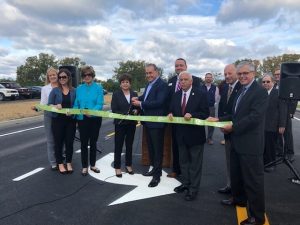 The Chamber, along with, Colonie Town Supervisor Paula A. Mahan and other town officials joined the Galesi Group and the Colonie IDA for a ribbon-cutting on the new connector road running through the former Starlite Theater site from the Route 9R (Columbia Street Extension) to Route 9, at 9 a.m. on Tuesday, September 24, 2019.

Coliseum Drive connects to Route 9 opposite Autopark Drive, where a new traffic light has been installed at the intersection.

The connector road was constructed as a public benefit in connection with the Galesi Group’s project to construct the new Ayco headquarters on the site.

“We are very excited about this new connector road,” said Supervisor Mahan. “The Capital District Transportation Committee recommended this connector road as the best strategy for improving traffic flow in this sector, and it has been one of our long-term goals. I want to thank the Galesi Group for helping us get it built and for their care and concern in getting it completed so quickly.

“After working extensively with the Town of Colonie and DOT we are pleased to announce the opening of Coliseum Drive. This creates a connection between Johnson Road and Route 9 to help mitigate traffic adjacent to the former Starlite Theatre” – David Buicko, President and CEO of the Galesi Group.

The connector road, which is almost half a mile long, was constructed by Rifenburg Construction Inc., with Creighton-Manning serving as the road engineer.