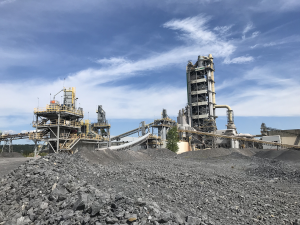 The cement the Ravena plant produces is used in everyday life in many ways besides the obvious foundations and sidewalks. Some of the more recognizable New York projects in which our products feature prominently include: GlobalFoundries in Malta, the Gilboa Dam, the state Comptroller’s Office at 110 State St. in Albany, the FedEx distribution center in East Greenbush, the Amazon warehouse in Schodack, and Rivers Casino and Resort in Schenectady. Outside the upstate area, cement produced at the Ravena plant has been used in such high-profile projects as One World Trade Center and the World Trade Center Memorial in Lower Manhattan and Giants Stadium in East Rutherford, NJ.

Did you know that the Lafarge Ravena plant is the largest cement plant in New York State? We are also well known for our support of local community events and projects, including the Coeymans Riverfest and the Village of Ravena’s Friendship Festival. In 2017, the Lafarge Ravena plant completed a three-year, multimillion dollar modernization project that placed an emphasis on sustainable operations and operational efficiency. The centerpiece of this project was a new kiln line that exceeds state and federal emission limits and increased production capacity to meet growing market demand.