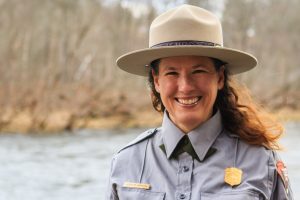 “The victory at Saratoga changed the entire course of the American Revolution,” Vietzke said. “The park has an important role to play as we get closer to America’s 250th birthday in 2026. Leslie’s background in planning, visitor use management and partnerships provides a crucial skill set needed to lead the park as we approach this milestone.”

“I am honored and excited for the opportunity to serve as superintendent at this pivotal site in the history of the United States,” Morlock said. “Saratoga National Historical Park is a unique place to learn about a key turning point in American history, explore nature and honor those who walked the hallowed grounds before us. I look forward to working with the dedicated park team, the Erie Canal National Heritage Corridor, other partners, and the community to preserve this important site for future generations.”

Morlock comes to Saratoga from Delaware Water Gap National Recreation Area where she served for eight years as chief of strategic planning and project management. During this time, she oversaw a variety of programs, including safety, lands, leasing, project management and environmental compliance. Morlock spearheaded the planning effort for the park’s newly released Visitor Use Management Plan. Prior to joining the National Park Service, Morlock worked for county governments in Colorado, Pennsylvania and New York and as an archeologist in the private and public sectors. She started her career at Hawai’i Volcanoes National Park. Morlock holds a Bachelor of Arts in anthropology and environmental studies from Grinnell College and a professional graduate certificate in Leadership for Public Lands and Cultural Heritage.

Morlock is originally from southeastern Minnesota and has been living in the Pennsylvania-New York region for the last 19 years. Leslie, her husband, Jim, and their dog Murphy are looking forward to taking on the 100-mile challenge exploring the trails at Saratoga.