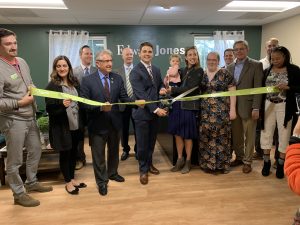 The Chamber took part in a ceremonial ribbon cutting on Wednesday, October 9 for Nick Trotta and the Edward Jones of Niskayuna. Nick was supported by family, friends, colleagues, mentors, Chamber Ambassadors and local elected officials.

Trotta relocated the office from the previous St. James Square location in Niskayuna earlier this year.  “I am excited to take over the Edward Jones Office in Niskayuna,” Trotta said. “I know the people of this community have come to rely on our firm to provide them with the sound advice that is geared toward individual investors. I will strive to continue our tradition of excellence here.”

Trotta, a former engineer in both defense and commercial industries, joined Edward Jones several years ago. A Penn State graduate, Trotta holds a Bachelor of Science and master’s degree from the university.