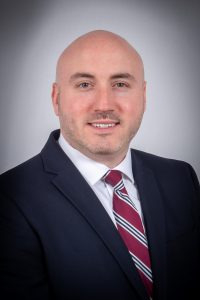 Community Bank N.A. is pleased to announce that Joshua O’Leary has joined its team as vice president, commercial banking officer in Albany, New York. With the addition of O’Leary, the bank’s Albany Commercial Banking team will grow to seven team members.

In his new role, O’Leary will develop and grow commercial banking relationships across Upstate New York in a variety of industries. He will also manage existing customers to deepen relationships through additional products and services.

O’Leary has more than a decade of experience in the financial industry in both portfolio management and credit analysis. He joins Community Bank N.A. from Ballston Spa National Bank, where he most recently served as a commercial relationship manager. Prior, he spent time with Pioneer Bank and TD Bank.

Outside of the office, O’Leary is an active leader in the Capital Region, serving on numerous boards, including Town of Clifton Park Industrial Development Agency and American Red Cross Eastern New York Region. Previously, he sat on the steering committee for the Capital Region Chamber Leadership Tech Valley.

O’Leary earned his Bachelor of Arts in economics from University at Albany and his Master of Business Administration from The College at Saint Rose. Additionally, he is a 2017 graduate of Leadership Tech Valley through the Capital Region Chamber. O’Leary resides in Clifton Park with his wife, Kimberly, and their two children, Madison and Macklin.