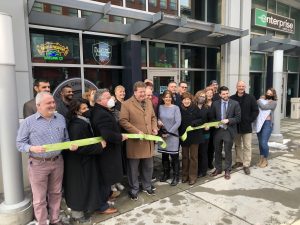 The Chamber had a blast at the official opening and ribbon cutting for the Albany Stadium Restaurant & Bar on Wednesday, February 8. The Chamber was joined by many local elected officials, Chamber Ambassadors, business supporters, family, friends and staff.

Departing from recent history, the gorgeous space inside the MVP Arena is a full-service restaurant and open beyond just event times – weekdays for lunch, happy hour, and dinner; Saturday nights for dinner; and extended evening and weekend hours [before and after all MVP Arena shows and events].

It might seem a leap from IT to hospitality, but it is not much of a stretch for the partners. Enright previously owned a restaurant out of state, and Anilowski has a long history as a successful entrepreneur of varied businesses.

“Our IT company has been in the building for several years, and we thought it unfortunate the beautiful restaurant space was not utilized to its potential,” Enright said.

To that end, the restaurant is focused on catering to the downtown lunch and after-work hours crowd, while also planning to capitalize on the busy event schedule at MVP Arena.

“We want to be an active participant in downtown life,” Anilowski said. “We have two businesses here, and we are vested in the community.”

Jennifer Hewes was hired as the executive chef, a well-known name to Capital Region foodies, most recently employed at The Point; and the menu boasts several unique items including gourmet grilled cheeses, stuffed jalapeno peppers, chicken and riggies, and a lobster mac and cheese.

There is a fantastic horseshoe bar with 16 beers on tap and large television screens; and the upstairs, with seating for 100 and a dedicated bar, is available for special events.

Enright and Anilowski met years ago on a recreational tennis team, became friends, and joined forces to launch Tech Forward, Inc., a certified veteran-owned business. Anilowski is a former United States Marine and has over 20 years’ experience as an IT professional; Enright has an MBA with a concentration in Management and a history of executive management experience.

While Albany Stadium Restaurant & Bar has not yet selected a charity, the organization will be practicing intentional giving; as does Tech Forward, Inc., which sets aside a designated percentage of gross revenue for others. TFI previously supported the Veterans & Community Housing Coalition, and this year began supporting Patriot Hills; both are local agencies assisting vets in the transition to civilian life.