Home > News > A Sign of Changing Times at MVP Arena 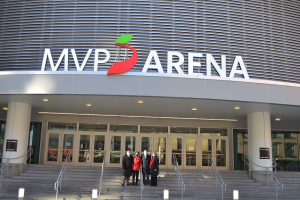 MVP Health Care President and CEO Chris Del Vecchio and County Executive McCoy got a preview of the marquee letters at AJ Sign Co. before they were placed on top of the MVP Arena. (pictured).

An official ribbon cutting and an unveiling of other great visual changes at MVP Arena will take place next week.